Fibroids are muscles that grow on the uterine wall. They are almost benign tumors and they become large in rare cases. Doctors classify them based on their location. In women who have no symptoms, treatment can be difficult.  Signs and symptoms of this problem are as:

Factors such as obesity increases risk of fibroids. 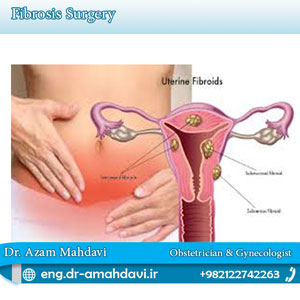 those women who have fibroids, face more problems during pregnancy and delivery than other women, but not so much serious problems. Most of these women experience normal pregnancies.

The most common problems that can be observed in pregnant women with fibroids, are the following: the need for cesarean section for the inappropriate position of the fetus. In this type of female, the fetus is not usually in a position where the mother can live through a natural birth. Despite labor pain, there is no progress in normal delivery. Preterm delivery. Treatment of fibrosis, As mentioned, most women with fibroma have no symptoms. For women who have symptoms, there are many therapies. Before choosing a treatment, you should consider a lot of things.

Myomectomy. Removal of fibroids without removing the normal uterine tissue through surgery. This treatment is best for women who intend to become pregnant after surgery. Myometectomy can also be done through abdominal open surgery and through laparoscopy or hysteroscopy. Hysterectomy means the removal of the entire uterus through surgery. This method is the only guaranteed method for treating fibroma.

This is the case for women who have very severe bleeding, the size of their fibroid is very large, they are or are about to reach the age of menopause, and do not decide to have a pregnancy.