Ovarian cysts, are usually benign ovarian masses, often produced from ovarian tissue, and in many cases from ovary surface follicles.

In fact, the cysts of the ovary are composed of massive bundle masses that have a single wall and some simple fluid is accumulated in it. Different causes can cause these cysts, which is largely due to non-ovulation. Because a follicle that is supposed to create an ovum and usually occurs on the 14th day after the onset of a menstrual period and releases the egg, it does not occur in this person and becomes a cyst with the accumulation of water inside it. Gets

Sometimes several oocytes are produced, and this is repeated, and a large number of small cysts are created in the ovaries known as polycystic ovaries (PCO).

Cysts have different types, but most commonly seen ovarian cysts are mostly simple cysts. But in some cases, these cysts can be malign and dangerous, which requires sophisticated medical discussions to explain them.

Sometimes, from the site of ovarian follicles, in the second phase of the monthly cycle called the Levitin period, it is made of letyline cysts, which are also known as functional cysts and are not dangerous. These cysts are either eliminated either by themselves or by simple treatments, by causing hormonal disorders. One of the important reasons for treating ovarian cysts is also an important factor in infertility. With the treatment of obesity, cysts are expected to be resolved and fertility will increase. The symptoms of most cysts will never be detected and they will be resolved without women knowing which cysts are affected. When a cyst causes symptoms, pain in the abdomen or pelvis is the most common symptom. The pain can be due to rupture of the cyst, rapid growth and dilation, blistering into the cyst, or cyst biting around its blood supply. 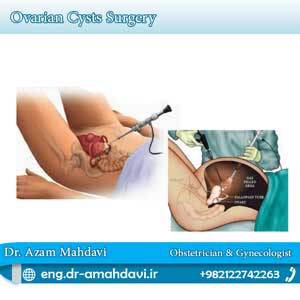 The preferred method for treating ovarian cysts is laparoscopy of the ovarian cyst. This can be achieved in cases where there are other diagnostic issues. In laparoscopy, the surgeon’s ovarian cyst uses volumetric abdominal space through a 3 to 4 inch 1 cm cavity to remove the lump. Laparoscopy has complications and Bleeding is less than open surgery. The patients express more satisfaction.